The orchestra was created in 1939, productively works not only in the city of Dnipro and in the region, but also throughout Ukraine and abroad.

Dnipropetrovsk Symphony Orchestra has many glorious pages of creative collaboration with outstanding musicians of our time. A number of international festivals, in which the Dnipropetrovsk Symphony participated, showed that the orchestra is ready to adequately represent Ukrainian art at the world level. The artistic composition of the orchestra has changed considerably in recent years. New talented performers and soloists came to the band. It expanded the repertoire of the orchestra. The music of ancient masters, western European and domestic classics, modern works of Ukrainian and foreign authors sound in the programs of the orchestra. Thanks to successful tours in Italy, Spain, Portugal, Poland, Scandinavia, the orchestra received a new impetus for the development, consolidation and expansion of its creative activity. 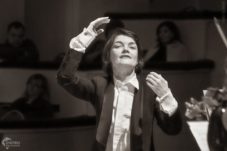 The young, brightly gifted conductor is Honored Artist of Ukraine.
Since 2002 he has been the head of the Dnipropetrovsk Philharmonic Symphony Orchestra.

During the leadership of N. Ponomarchuk, symphony orchestras at the Dnipropetrovsk Philharmonic have prepared concert programs featuring works by Beethoven, Mozart, Prokofiev, Rachmaninov, Verdi, Rossini, Strauss, Berlioz, Brookner, Mahler and many other world classics.
Natalia Ponomarchuk has prepared and conducted two major tours in Italy, in one of which the Symphony Orchestra participated in the International Festival dedicated to the SS Prokofiev’s anniversary in Milan. 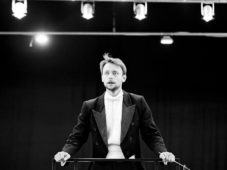 In 2016, he was invited to the Bavarian State Opera as conductor for the production of the world premiere of the opera H. Berheim “MAUERSCHAU”, as well as participated in the international project of the memory of the victims of the shooting in Babiy Yar with the National Academic Chapel of Ukraine “Dumka” and the Hamburg Philharmonic Orchestra. Conductor-producer of the performances: “They do everything so” V.A. Mozart and “Maid servant” JB Pergolizi. During his career he collaborated with many national concerts from many countries of the world.